Passengers have been quarantined on board an Emirates airplane at JFK airport in New York, after 100 reportedly fell seriously ill during a flight from Dubai.

Emirates Flight 203 from Dubai arrived at 9 a.m. ET Wednesday with the pilot expressing concerns over dozens of passengers sick with fevers over 100 degrees F (37.7 C) and coughing, according to local reports.

The plane was met by officials from the Port Authority Police and the Centers for Disease Control and Prevention in a staging area to check passengers.

NYPD Counter-terrorism said it was “monitoring” the quarantine in case the incident progressed above a medical situation and that it was working with the Port Authority and Federal partners.

Monitoring what appears to be a medical situation at JFK airport. We are working with the Port Authority and our Federal partners. pic.twitter.com/HisKnrqXst

The aircraft is not going to a terminal, instead it’s being directed to a hard-stand area as emergency medical response teams investigate the cause of the illness.

BREAKING: An Emirates plane is in quarantine at JFK Airport awaiting CDC officials after as many as 100 passengers became ill, some with fevers over 100 degrees and coughing. Flight 203 had just arrived from Dubai. https://t.co/1Goiubjp43

Photographs tweeted by passengers inside the plane show dozens of ambulances and police vehicles parked and waiting as the aircraft landed.

One passenger, Larry Coben, said: “All we have been told is that some passengers have fallen ill and we should remain in our seats.”

BREAKING: An Emirates A380 in quarantine at JFK Airport right now awaiting CDC officials after about 100 passengers became ill with fevers over 100 degrees and coughing. Flight 203 had just arrived from Dubai. pic.twitter.com/lyUgNbMaEW

He tweeted that he had seen “no evidence of illness”, but added that Flight 203 has “two levels”.

Emirates flight crew being loaded into Ambulances at JFK Airport after about 100 become ill with temperatures over 100 degrees on flight from Dubai. Aircraft remains quarantined. pic.twitter.com/5zXrgGpBu3

While the cause of the illness remains unknown, local reports on the ground from a source briefed on the situation believe it may be food related. However, this may change with new information provided by the CDC. 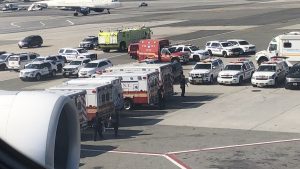