However, 2017 wasn’t just a year for discovering new creatures, it was a time for finding ones we thought we’d lost forever

While it might seem like we’ve got the animal kingdom pretty well cataloged, new species are constantly turning up in the deep oceans, thick jungles, or even dusty museum store rooms. Here’s our favorite new additions to the Tree of Life in 2017, as well as a couple of “Lazarus” creatures that were believed extinct but rediscovered this year.

Note that it often takes a few years for reports to be verified, so although some of these animals may have initially been discovered in previous years, we’ve included them if their existence was confirmed and/or announced in 2017. 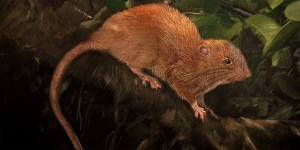 The locals of the Solomon Islands have long told stories of giant rats that live in the trees and are big enough to crack open coconuts, but it wasn’t until recently that scientists discovered that the creatures did actually exist. Dubbed the Vangunu giant rat (or Uromys vika), the new species measures about 46 cm (1.5 ft) from nose to tail, and can weigh up to 1 kg (2.2 lb) – almost three times the size of a common brown rat. 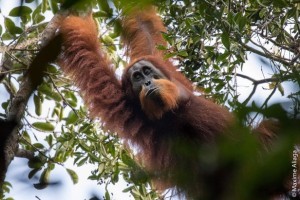 The great apes are a pretty exclusive family, including us and only a handful of gorilla, chimp and orangutan species alive today. So it’s a pretty big deal to welcome a new member into the family for the first time in almost a century.

Meet the Tapanuli orangutan. Hailing from northwestern Sumatra, a small population was originally discovered in 1997, but has only now been recognized as a distinct species. Researchers reached that conclusion by way of genetic studies, skull morphology, and observations in the wild of behavior, calls and diet.

Unfortunately, with only 800 individuals left the Tapanuli orangutan was fast-tracked to the Critically Endangered list.

The ocean will probably never give up all of its secrets, but a new one came to light in 2017. The Mariana Snailfish seems to be the deepest-dwelling fish in the world, having been recorded diving to depths of 26,830 ft (8,178 m).

The snailfish is named after its home in the Mariana Trench, which is the deepest known part of the ocean at more than 36,000 ft (11,000 m). Although their fleshy forms look pretty unassuming, the Mariana Snailfish is perfectly adapted to the extreme environment that far down, making it the top predator in its home turf. 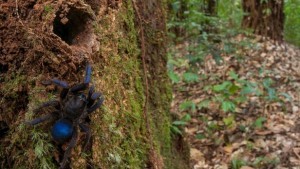 A Biodiversity Survey Team reported more than 30 new species on a recent expedition in Guyana, but the most striking was this as-yet-unnamed tarantula. Reptile specialist Andrew Snyder says he was out on a night hike when his flashlight beam bounced back a brilliant blue. At first, he assumed it was just a spider’s “eye shine” – the reflection of light off a membrane in the eyes of animals – but on closer inspection, he realized it was the bright blue legs of a tarantula.

Not only was this the first tarantula of that color found in South America – cobalt blue tarantulas are usually endemic to Southeast Asia – but it was also apparently living in a colony, which is unusual for the spiders. 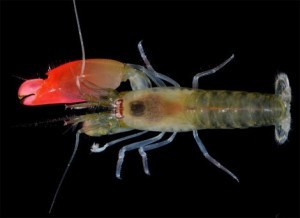 The Pink Floyd pistol shrimp is pretty aptly-named: Not only does the creature have a neon-pink claw, but it can literally kill its prey with sound. Like other pistol shrimp, Synalpheus pinkfloydi can snap its big claw shut so powerfully that it creates “cavitation bubbles,” which implode with such force they can stun or kill small fish. The sound can reach 210 decibels, meaning it’s louder than a gunshot. 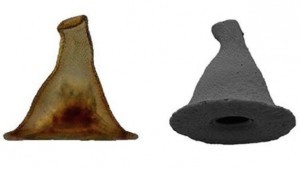 Another organism with a pop culture-inspired name, Arcella gandalfi gets its title because of its resemblance to the headwear of choice of Gandalf from The Lord Of The Rings. Although these hard-shelled freshwater amoebas had long been rumored to exist in Brazil, they’ve only recently been found in high enough numbers for scientists to declare them a unique species.

Measuring 81 micrometers wide and 71 micrometers tall, these wizard-hat-shaped amoebas are actually quite big for single-celled organisms. 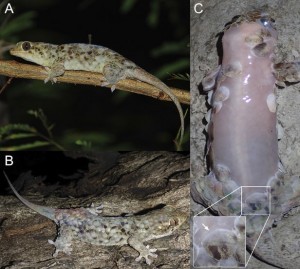 Lizards are known to drop their tails at a moment’s notice to evade predators, but the newly-discovered large-scaled fish scale gecko takes that a step further. This little critter can shed its skin and scales in seconds, and slip away naked.

The new gecko and its closest relatives make their getaway thanks to their large, overlapping scales, which are only attached to the skin along one edge. As soon as a predator (or a scientist trying to study them) grabs it, those scales tear away extremely easily, leaving the creature free to bail. Its entire coat grows back in a matter of weeks, and the speediness of that regeneration has inspired scientists to study whether we could learn from them to improve our own healing abilities. 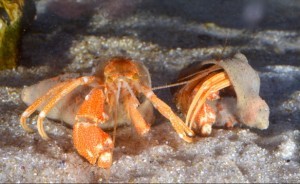 Most hermit crabs make their homes in tough shells, but the newly-identified green-eyed hermit crab has other ideas. Their shells are actually alive – sea anemones anchor themselves on the backs of the crabs and slowly build a soft mass around their host out of sand and organic material. The two creatures then scour the sea together like a mismatched duo in a Pixar movie.

Measuring about 70 mm (2.8 in) long and with striking green eyes, the new species lives in a small patch of water off the West Coast of South Africa. 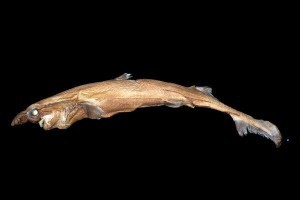 Discovered off the coast of Hawaii at a depth of about 305 m (1,000 ft), Etmopterus lailae is a new species of Lanternshark. And it’s not hard to see where the creatures get their name: their bio-luminescence means they light up their dark habitats.

This new type of Lanternshark grows to be less than 30 cm (1 ft) long and weighs at most 0.9 kg (2 lb). Its differentiated from its relatives by its strange elongated snout, which may have helped it find food, as well as different markings, teeth and bones.

Back from the dead 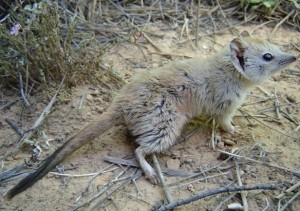 2017 wasn’t just a year for discovering new creatures, it was a time for finding ones we thought we’d lost forever.

A bug as big as your hand might be something people are willing to lose, but the Lord Howe Island stick insect was confirmed alive and well a few months ago. It was originally wiped out on its native island in the 1920s thanks to invasive rats, but after being rediscovered on a nearby island, genetic tests showed the species lived on. Plans are now underway to reintroduce them to Lord Howe Island.

The Crest-tailed Mulgara, a carnivorous marsupial from the Australian desert, had a similar revival. While it lived on in other parts of the country, the Mulgara hadn’t been seen in the Australian state of New South Wales for over a century. While setting up a safe zone for endangered native fauna, a team of conservationists found that it had already moved back in.

And finally, the New Guinea Highland Wild Dog, which hadn’t been seen in the wild in more than 50 years, was rediscovered in its native habitat. An expedition tracked at least 15 of the animals, including males and females, adults and pups. Along with over 100 photos, the team found tracks, fecal samples and dens.