Marriage is a serious, life-long commitment, and thus the decision to get married is never an easy one, right?

Well, not necessarily, when we are talking about Cypriots!

According to the latest figures published recently by Eurostat, the European Union’s statistics authority, the Mediterranean island of Cyprus came first in marriages contracted in the entire EU in 2018. 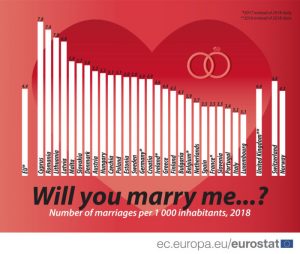 More specifically, Cyprus recorded 7.8 marriages for every 1,000 residents, while the average for Europe was only 4.4!