MailOnline/DailyMail.com is suing Google for alleged anti-competitive behavior over the search giant’s ability to exploit its dominance in the ad tech industry to harm rivals and manipulate ad auctions and news search results in a way that punishes online publishers.

The anti-trust lawsuit against Google was filed in the US District Court in New York on Tuesday by Associated Newspapers Ltd. and Mail Media Inc, the parent company of DailyMail.com and MailOnline.

The lawsuit accuses Google of utilizing its market power dominance to increase profits for themselves by engaging in bid-rigging and search bias that harms publishers and advertising rivals.

It is the latest in a series of lawsuits filed against Google by the US Justice Department and attorneys general in several states that accuses the tech company of monopolization and eliminating its competition.

Separately, anti-trust enforcers in the US, UK and Australia have also been investigating Google’s conduct.

The new lawsuit filed by Daily Mail alleges that Google has illegally built its dominant position in the ad tech industry over the last decade and now controls the tools that publishers and advertisers use to buy and sell online ad space in what has become a $125 billion industry.

These tools include the software that publishers use to sell ad inventory and the marketplace, referred to as an exchange, where millions of ad slots are sold in auctions each day.

Google exploits its control of those ad tech tools by forcing publishers to use its own ad server, which it has tied to its own exchange, in a bid to stamp out competition from rival exchanges, the lawsuit alleges.

Biden preparing to declare that atrocities against Armenia were Genocide

Mitsotakis’ interview: The meeting with Erdogan will take place soon

According to the complaint, Google makes it difficult for publishers to compare prices among different exchanges, reduces the number of exchanges that can submit bids for ad space and even uses bids offered by rival exchanges to set its own bids. 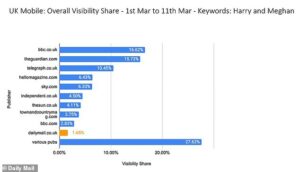 (According to the complaint, Google punishes publishers by allegedly manipulating search rankings if they do not sell enough advertising space through the tech company’s own exchange. For example, keywords related to Daily Mail’s recent coverage of the UK royals and Piers Morgan, who is DailyMail.com’s editor at large, has not prominently shown up in Google search results)

This lack of competition means Google ends up ahead because it controls a growing share of the ad space that remains, the lawsuit alleges.

‘This lawsuit is to hold Google to account for their continued anti-competitive behavior including manipulation of ad auctions and news search results, bid rigging, algorithm bias and exploiting its market power to harm their advertising rivals,’ a Daily Mail spokesman said.