Greece was ranked in the last 3 countries among EU nation-states in the Economist Intelligence Unit (EIU)’s Democracy Index for 2018.
Read the full report here

Only Romania and Bulgaria had a worse ranking than Greece on the table among EU countries, with Greece declining to 39th spot on a global scale.

Unsurprisingly, Scandinavian countries occupied the top spots both in Western Europe, with Norway coming first, followed by Iceland and Sweden.

European countries still held the top positions overall in the global ranking, with Norway in first place and Iceland and Sweden on second and third, while Syria (167) and North Korea (last) were on the opposite end of the spectrum as the least democratic countries.

Greece continues to be characterised as “flawed democracy”, with a total of 7.29 out of a perfect 10, while its showing in other factors was also lacking; in “operation of the government” it scored a little above the base (5,36), while in the “political participation” it recorded 6,11. 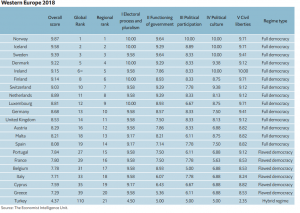 In the field of “electoral process and pluralism,” Greece got 9.58, one of the best rankings in the EU. However, in “political culture” Greece dropped to 6.88.

Significant drops in scores were recorded in Austria, Georgia, Hungary, Russia and Turkey, and most notably in Italy, due to increased support of anti-establishment parties and “strongman” politics.
On the other hand, “substantial improvement” were reported in Armenia, Estonia and the Republic of Macedonia. Estonia ranked as eastern Europe’s best “flawed democracy” in 2018, “owing to a significant improvement in perceived confidence in the government and political parties.”