One of the rarest species on Earth!

Forget about the minuscule odds of spotting Ahab’s white whale: Sightings of the frilled shark, a so-called “living fossil” that has elusively swum around Earth’s deep waters since the age of the dinosaurs, may been an even rarer find.

Deep-sea fishermen recently spotted the snake-like shark (Chlamydoselachus anguineus) in a pile of fish that unintentionally caught, known as bycatch, while they were fishing off the coast of Portugal. The shark died, but the fishermen handed it over to a research vessel, where scientists could study it, according to Boy Genius Report (BGR), a news site. 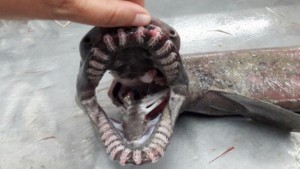 The examination gave scientists a close-up look at the shark’s roughly 300 three-pointed teeth, which it uses to grab and kill prey, including fish, squid and other sharks.

Margarida Castro, a fishery science researcher at the University of the Algarve, in Portugal, told Sic Noticias, a Portuguese news outlet, said that these strange teeth, arranged in a frill-like pattern, inspired the shark’s name. The teeth look like backward needles, and its jaw can snatch prey more than half its size.

The roughly 5-foot-long (1.5 meters) shark has barely changed in the past 80 million years, earning it a “living fossil” title. The fishermen reported catching the C. anguineus at 2,300 feet (700 m) under water — about half as deep as it can swim, as the species is known to range from about 65 feet to 4,900 feet (20 to 1,500 m) underwater, according to the International Union for Conservation of Nature (IUCN). 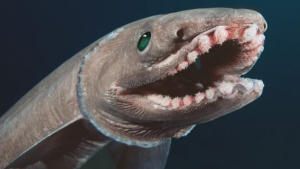 These sharks have an incredibly long gestation period lasting between one and two years — a period almost on a par with that of an elephant, according to the IUCN. Moreover, like an elephant calf, these shark pups aren’t small. The pups are born live (as opposed to being laid as eggs) and can measure up to 2 feet (60 centimeters) long, the IUCN said. They are usually born in litters of two to 15 pups, the organization added.

In December 2003, a single trawl caught 34 frilled sharks — 15 males and 19 females — just north of the Azores Islands in the mid-Atlantic Ocean, about 900 miles (1,400 km) west of Portugal. Given that it’s rare to catch C. anguineus, it’s likely that the trawl captured the sharks during a mating event, according to a 2008 study in the Journal of Ichthyology.

Even though both the 2003 catch and the most recent one were near Portugal, these toothy sharks live in both the Atlantic and Pacific oceans, usually near outer continental shelves and the bases of islands, the IUCN said. As an “animal of least concern,” it’s far from endangered, likely, in part, because it’s rarely caught as bycatch. However, when fishermen do catch it, C. anguineus is typically discarded, used as fishmeal or kept for its meat, the IUCN said.

Even though it’s not endangered, there are still safeguards in place to protect the shark. In 2007, the European Union Fisheries Council established a “zero total allowable catch limitation” for vulnerable sharks, the IUCN said. The frilled shark was added to this list in 2010, and the measure was enforced starting in 2012. Parts of Australia also prohibit trawling in areas below 2,300 feet (700 m), the IUCN reported.

Even so, a fisherman in Australia caught one of these weird beasts in 2015, Live Science previously reported.