When the theme park known as Star Wars Land opens its doors at Disney World in 2019, it promises to be an immersive experience that any fan of the beloved saga will go crazy for.

Over the weekend at Star Wars Celebration, we saw some teases of what will be available in the park, and now it sounds like there could be a resort inside the land that will be a must-stay for “Star Wars” fanatics.

According to Walt Disney World News Today, Disney has sent out a survey to guests gauging their interest in a possible hotel resort experience inside Disney World, most likely located in Star Wars Land, which would be designed to look like you’re staying on a starship.

Concept art included in the survey being done by Swagbucks shows that the lobby, guest rooms, and other areas of the resort definitely have the feel of the familiar ships seen in the “Star Wars” movies.

The survey also highlights the unique experience you would get out of the two-night, all-inclusive package that will cost roughly $900 to $1,000 per guest, including a two-day story set in the the “Star Wars” universe, personal interactions with “Star Wars” characters, live performers throughout the starship, plus the ability to engage in the story by doing flight training, ship exploration, lightsaber training, and personalized secret missions (both on the starship and throughout Star Wars Land).

Your stay also gets you buffet breakfasts, lunches, and evening dining, exclusive park admission to Star Wars Land, and starship amenities including a pool area and water garden, ﬁtness area, onboard cantina, and — wait for it — robotic droid butlers. 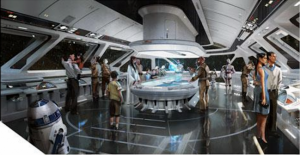 It sounds like Disney is just at the idea phase with the resort, but this is just another example of how ambitious Disney World is being in executing Star Wars Land.