The online conference will last for four days

The second day of the 4-day online Conference on the Distomo Massacre entitled “Political will to claim war compensation to Greece”” took place with the participation of a number of Greek and international public figures and local politicians. 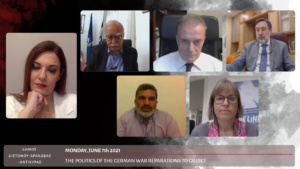 The conference organised by the Municipality of Distomo, Arachova, Antikyra, in the framework of the Anniversary Events of the Massacre of June 10, 1944. , June 7, 2021, focused on ways to advance the demands for reparatory compensation.
Faye Mavragani, a journalist, who coordinated the proceedings of the session, referred to her origin from Distomo and the stories of the Massacre recorded in individual and collective memory, raising the demand for justice as a matter of moral order. 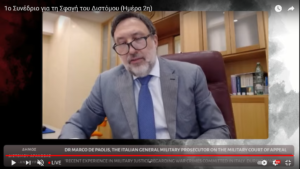 Giannis Stathas, Mayor of Distomo, Arachova, Antikyra, as the speaker of the second session, starting from the lived experience of the memory of the Distomo massacre, stressed the need to strengthen historical knowledge and consciousness, in order to avoid repetition and perpetuation of crimes against humanity. 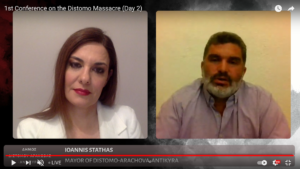 Fanis Spanos, Regional Governor of Central Greece, spoke about his first visit to the long-suffering Distomo, where, as he mentioned, he met “melancholic people”. This experience strengthened his resolve to join the cause in the footsteps of his predecessors and the Distomite community in calling for a just demand of moral vindication, as only this will soothe the deep wounds of the past. Following his speech, the Governor announced the decision of the Regional Council to finance the upgrade of the Museum of the Victims of Distomo from Nazism.

Athanasios Papadopoulos, Mayor of Kalavrita and President of the Network of Martyred Cities and Villages of Greece in the period 1940-1945, was visibly moved and referred to the collective trauma of the Kalavrita Holocaust, the heinous crime of the German occupying forces, and the outstanding debt. As he characteristically stressed, “every crime without punishment generates the conditions of recurrence”.

Dr. Marco De Paolis, the Italian Military Prosecutor, known for his many years of judicial investigations into the crimes committed by German military forces against the civilian population of Europe during WW2, awarded with international distinction, in a sober speech alluded to restorative justice for affected communities, a process that imposes collective punishment in cases where individual justice is impossible and focuses on the lost dignity of the victim. As Dr. De Paolis “the restoration of dignity is achieved only through the punishment of the perpetrators”.

Heike Hänsel, a member of the German parliamentary group Die Linke, addressed the issue of compensation in the German Parliament, stressing that compensation is the key to vindicating the victims of war criminals. For this reason, restorative justice must be strengthened through individual compensation practices, which only affect the country of the perpetrators. Ms Hänsel closed her presentation with a reference to the Hellenic-German Fund for the Future, saying that its operation should not replace the claim for compensation while criticising the German government’s practice of categorically rejecting the dialogue and instead focusing on cultural and diplomatic compensation. 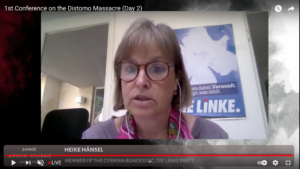