It was measured over 4 metres long

A monster 4.2 metre-long squid has washed up on the shores of New Zealand’s capital.

Three brothers were out for a morning dive in Wellington when they came across the impressive creature.

Daniel, Jack and Matthew Aplin were driving along on a track near Red Rocks on the city’s South Coast when they came across the beached cephalopods. 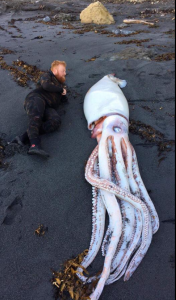 The brothers said they had come across sharks while on their diving trips but had never seen a squid of that size. 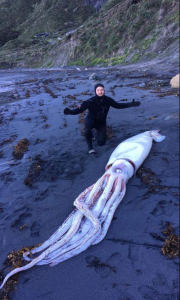 The trio contacted the National Institute of Water and Atmospheric Research, who arranged to have the squid collected.

A Department of Conservation spokesman said it was almost certainly a giant squid, the bodies of which washed up relatively regularly.