A doctor who says he was wrongfully sacked for refusing to address patients based on their preferred gender instead of their biological sex is suing the government.

Dr David Mackereth says he lost his job doing assessments for the Department for Work and Pensions (DWP) last June because he believed using transgendered pronouns were against his conscience as a doctor and a Christian.

He lost his job after the DWP declared that failing to accommodate clients’ preferences would amount to ‘harassment’ under the Equality Act! 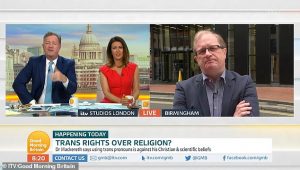 Today he told the TV show “Good Morning Britain” that he does not believe it is possible to switch from the gender or sex you have at birth as presenter Piers Morgan slammed him as a ‘bigot’.

‘We have a problem whereby changing the way we use pronouns we change the society that we are a part of and it changes every one of us,’ he said. ‘Using pronouns in that way is dishonest and I can’t do that in good conscience.

‘I don’t believe a person can change either their sex or their gender, I believe they are both the same thing. The bible tells us that the God makes us male and female.

‘By claiming I’m a bigot you are claiming that the whole of Christianity is bigoted and I don’t believe that.’

Piers hit back that if the doctor followed every instruction of the Bible, he’d advocate stoning to death anybody who has looked ‘lustfully at someone’.

The 56-year-old appeared on the show alongside India Willoughby, who was born male but underwent reassignment surgery and identifies as female.

The former Celebrity Big Brother contestant denied that Dr Mackereth lost his job as a result of a clampdown on religion, saying: ‘Nobody is trying to clamp down on religion. If it brings you comfort and solace it’s a great thing.

‘The issue is that it’s now 2019, it isn’t the days of the bible any longer. I think God would be really cool with transgender people. We wouldn’t change wine into water but men into women and women into men.’

Dr Mackereth, a Reformed Baptist who had been an A&E doctor for 26 years in the NHS, was dismissed from his role as a ‘Health and Disability Assessor’.

His case, which is being supported by the Christian Legal Centre, is due to be heard before an employment tribunal in Birmingham today.

Dr Mackereth’s lawyers will argue that the DWP policy of compelling staff to use ‘transgender pronouns’ is a breach of the Equality Act and that the DWP has breached Dr Mackereth’s right to freedom of thought, conscience, and religion.

The medic from Dudley, West Midlands, has worked in A&E departments across the UK including the Princess Royal Hospital in Telford, Shropshire, for the past seven years.

‘I am determined to fight for justice in this case as firstly, as a society and in the medical profession, we are not allowed to say what we believe.

‘Christians must be able to hold and express their faith in private and public and to uphold Biblical and scientific truths without fear of losing their livelihoods.’

‘Dr Mackereth is a Christian hero who chose to sacrifice his distinguished professional career rather than compromise on the Bible and his conscience.

‘The requirement to use so-called transgender pronouns defies common sense and Christian faith. It serves no useful purpose except filtering out firm Christians and men of principle such as Dr Mackereth.

‘If we tolerate this as a society, if we give in on the essential freedom of thought, conscience and religion, no other freedom is safe.

‘We are determined to fight all the way to secure justice in this case. If freedom to tell the truth – in this case calling a man “he” and a woman “she” – is suppressed, then truth itself is suppressed.’

A DWP spokesperson said: ‘We expect all assessors to handle assessments sensitively and adhere to the Equality Act 2010.’