If the report proves to be accurate, this will be a major diplomatic victory for Greece

A draft document from top European Union diplomats was revealed on Tuesday, showing that the Union is considering the attachment to its post-Brexit negotiations’ strategy of a demand for the UK to return the Parthenon sculptures to Greece.

The document, which has circulated on social media platforms, shows a clause noting that ”The Parties, consistently with the Union rules, address issues related to the return or restitution of unlawfully removed cultural objects to their countries of origins.” 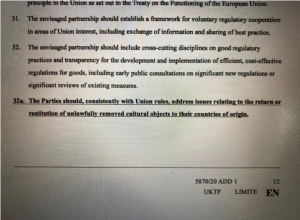 This news was originally reported on Tuesday by the US-based website Bloomberg, which claimed to have obtained access to these draft documents of the European Union’s negotiating mandate.

Bloomberg said that the top EU diplomats who are currently shaping the European position for the upcoming trade-deal negotiations with the UK have agreed to add this Greek demand to the prerequisites Europe will request from London.