A dog owner thought he would never see his best mate again after the pooch fell overboard during a nasty storm, but he was shocked when the dog turned up alive the next day.

Shane Hale and his pup Harley set sail on Saturday, but the weather soon turned nasty and a storm set in.

In the waters off Sarasota County, Florida, in the US, the pair were headed for Florida Keys and across the Caribbean, until the storm became too powerful and Harley fell overboard. 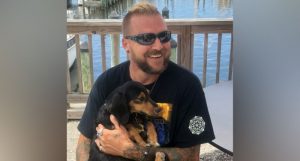 (Shane Hale said it was a miracle his dog was found alive the next day, after falling off the boat)

“I could see his head bobbing behind the boat, the swells, I don’t want to seem like an exaggerating kind of guy, but I think they were nearly [three meters] swells.”

Footage from before the storm shared to Facebook shows both Mr Hale and his pet were wearing a tether and life jacket onboard.

“I got to his tether and when I pulled the tether, I realized there wasn’t enough weight on the end of that tether for a dog to be on there. Sure enough I pull it out and I just see his life jacket,” he said.

“When he went off the boat and I see the way he went, I never in a million years expected to see my dog again.”

When Mr Hale arrived at shore, he shared a plea for help to find Harley.