The land of the free?

KPIX-TV reported that at least seven people were arrested in the rally. Multiple masked protesters were arrested about 40 minutes before the event started, which was scheduled for 9 p.m. PST at Wheeler Hall.

According to the San Francisco Chronicle, police in riot gear guarded the building’s entrances and barricades were erected in anticipation of the protests.

Coulter was invited to speak by the Berkeley College Republicans for a speech about immigration called “Adios, America,” the Chronicle reported. 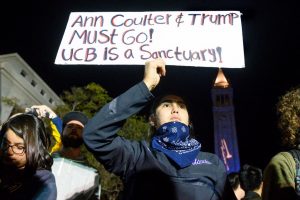 Attendees had to be escorted by police when they entered and left the building, according to the Chronicle, as demonstrators began pushing them chanting “don’t let them in.”

The Chronicle said the entire talk, including the Q&A portion, was about an hour long.

KPIX-TV reported that as soon as her speech began, Coulter was immediately interrupted by a woman who was handcuffed and escorted out of the hall.

A 2017 lawsuit accused the university of discriminating against conservative speakers after a scheduled appearance by Coulter didn’t take place in the wake of violence around a scheduled talk by another right-wing speaker, Milo Yiannopoulos.