Exit polls have shown that Mr Rutte’s VVD party will win 31 of 150 seats in today’s parliamentary election, compared to 19 seats for 3 other parties, including that of Mr Wilders. Weeks or months of coalition talks are expected to follow.
The exit poll was conducted at 43 of the 9,300 polling stations across the country. It had a margin of error of two percentage points.

Dutch media outlet NOS is reporting that the exit poll could mean that the Labour party, one of the country’s largest has lost a record number of seats.

The numbers would see the PvdA, which was in a coalition government with the Party for Freedom and Democracy (VVD), go from 38 seats to nine seats. That’s an unprecedented loss in Dutch politics. The leftwing party performed worse than it did in the 2002 election, in which it went from 45 seats to 23. 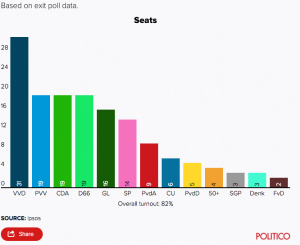