The famous Oscar-winning English actress, Emma Thomson, visited the beautiful island of Santorini with her daughter for the first time. She was probbaly looking forward to exploring some of the breathtaking vistas the island is famous for,as she has visietd Greece before, but what she did not expect was to be impressed with the island’s flavours and the traditional dishes. 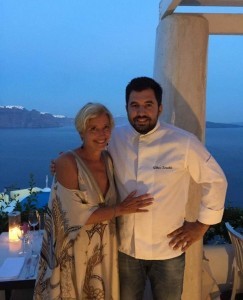 The restaurant that the British star loved the most was “Red Bicycle” in Oia, Santorini. And it was a coincidental encounter. She happened to stumble across the eatery during a walk in the cobbled streets of the island, and after being charmed by the view, she decided to book a table for the same evening. With her daughter she tasted the seafood dishes and was speechless from the light and delectable tastes. 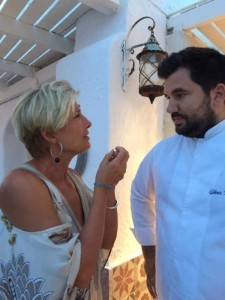 Some of their favourites were roasted crayfish with tara cream and tomato sauce, cod with lemon cream and vinegar, almond foam and fennel – orange sauce, grilled vine leaves, sweet potato and dill sauce, as well as the crisp quinoa and couscous with fresh shells, ahino, santorini zucchini and ouzo.