If a country that is against Turkey, gets the documents, maybe Turkey will had some problems

The “Anonymous Greece” a group of Greek hackers claim that they breached the Turkish company that manufactures weapons and relevant systems for the Turkish Armed Forces. Here is what they have written:

Maybe this will be a good gift for the Greek’s army. We have breached the company which they manufactures weapons and systems for the Turkish armed forces. The files/Documents shows the name of the weapon/system, one or two photo of them, and how the weapons works against the target. Not only these but also target tracking systems etc. A lot of different stuffs that we can’t write all of them.

The count of the files are 400+. We will show some screenshots covering names and the inside of the archives. 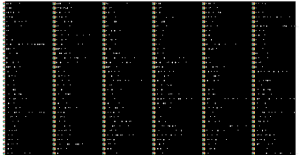 Its all the files/Documents. We hid the names of the files. If any Intelligence Service or Greece Army want these Documents, you can send us E-mail at: spyontarget@protonmail.ch

If a country that is against Turkey, gets the documents, maybe Turkey will had some problems.

Don’t forget to send us email if you want the download link of the sensitive documents => spyontarget@protonmail.ch