Turkish President Recep Tayyip Erdogan has urged Muslims across the world to “visit” and “protect” Jerusalem.
The leader’s comments on Tuesday came after days of violence sparked over access to the al-Aqsa mosque in the city’s Noble Sanctuary, known as the Temple Mount in Judaism.
The site is sacred to both Muslims and Jews and as such is a recurrent flash point in the Arab-Israeli conflict.
Israeli Prime Minister Benjamin Netanyahu’s cabinet voted Monday night to dismantle metal detectors set up outside al-Aqsa in response to an attack there by an Arab gunman that killed two Israeli police officers on 14 July.
Palestinians alleged Israel was trying to expand its control at the Muslim administered site, which is overseen by neighbouring Jordan. Israel has denied the accusations, saying they were necessary security measures. 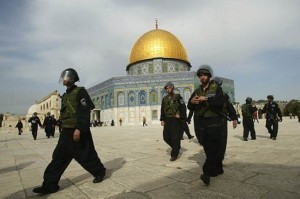 Attempts to deny Muslim men under the age of 50 access to the site for prayers led to mass protests in the contested capital.
Four Palestinians were killed in street clashes and three Israeli settlers were killed in their West Bank home in the ensuing unrest. On Sunday, two Jordanians were killed after one attacked a guard at the Israeli embassy in Amman with a screwdriver.

“From here I make a call to all Muslims. Anyone who has the opportunity should visit Jerusalem, Al-Aqsa mosque,” Mr Erdogan said in Ankara. “Come, let’s all protect Jerusalem”, he added.
Mr Erdogan also criticised what he said was the use of “excessive” Israeli force to break up recent street protests.
While the metal detectors are being dismantled, there have been several high profile calls for Palestinians to continue protesting by praying outside the site until other measures added earlier this month such as CCTV cameras are also removed.
Jerusalem’s Supreme Islamic Committee is due to meet later on Tuesday to discuss whether the steps taken by Israel are sufficient for Muslim worshippers to return to the sacred compound.