Erdogan’s power grab was years in the making, a culmination of his distaste for high rates that’s been linked to Islamic proscriptions on usury

Turkey is about to embark on one of the greatest central banking experiments in emerging markets — and the timing couldn’t be better.

Long a believer that high interest rates cause inflation, President Recep Tayyip Erdogan is finally putting that unconventional theory into practice by installing Murat Uysal as governor this month after firing his predecessor for failing to cut sooner.

As the drumbeat of political pressure grows on central banks from the U.S. to India, Erdogan has one-upped his counterparts thanks to broad new powers granted to his office after last year’s general election. A policy meeting on Thursday will show just how sharp a pivot the central bank is prepared to make. 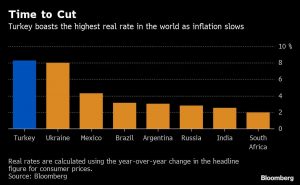 Turkey is ripe for monetary easing. A dovish turn in monetary policy globally and a downswing in inflation has left Turkey with the world’s highest real rate. Powerful base effects will likely continue to choke off price growth in the months ahead.

“To achieve an economic recovery, the central bank needs to ease fast enough and yet not so fast, given the implied weakness in the Turkish lira and imported inflation,” said Sebastien Galy, a senior macro strategist at Nordea Investment Funds in Luxembourg.

Erdogan’s power grab was years in the making, a culmination of his distaste for high rates that’s been linked to Islamic proscriptions on usury. In his view, producers have to pass on their higher borrowing costs to customers, so they raise prices.