Turkish farmer Turgay Yoldas’s water buffalo may become an even rarer sight in the hills west of Istanbul, thanks to a vast and costly infrastructure project that even the country’s president admits is a “crazy” idea.

“The land has turned to gold,” Mr Yoldas, 44, says of the local property boom, as his herd grazes near the Black Sea. “Only a few of us still own fields. Everything else is in the hands of developers.”

Land prices around the farmer’s village of Baklali, an hour’s drive west of Istanbul, have surged since President Recep Tayyip Erdogan announced plans to build a $13bn canal to take pressure off the congested Bosphorus strait. Originally proposed in 2011, its route was unveiled in January (see map).

Mr Erdogan has brushed aside legal, environmental and budgetary questions to make the canal a central plank of his re-election bid on June 24. The polls will usher in unprecedented executive powers that were won in last year’s referendum.

“One of my first projects in the new era will be to start building Canal Istanbul,” Mr Erdogan said as his campaign began on April 28. “There may be a Suez somewhere, a Panama somewhere else, but with Canal Istanbul we will send the world a message.”

The 45km (28-mile) waterway would cut through forests and farmland to forge a new passage between the Black Sea and Sea of Marmara. Ground is scheduled to be broken later this year on a project which would eventually carve Istanbul’s European side into an island. It crowns an estimated $250bn spending spree on infrastructure planned over the decade to 2023.

Mr Erdogan says the project is necessary to rescue the Bosphorus, one of the world’s busiest chokepoints for tankers carrying about 140m tonnes of oil each year. The government says 2m local residents are at risk from the strait’s traffic, such as from the hazardous materials transported. 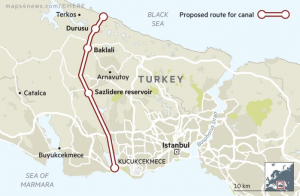 It is not clear how Turkey would persuade ships to pay a fee to bypass the Bosphorus. A 1936 treaty guarantees them free and unfettered passage through the natural waterway.

The landscape around Baklali is dotted with archaeological sites and criss-crossed by streams where Mr Yoldas’s buffalo wallow. The canal will transform it into a major transport hub, linking with a new airport the government says will eventually become the world’s busiest after flights start in October, and a bridge and motorway that opened in 2016. New suburbs to house hundreds of thousands of people are planned.

But environmentalists and urban planners say the canal will wreck a delicate ecosystem that sustains Europe’s largest city. 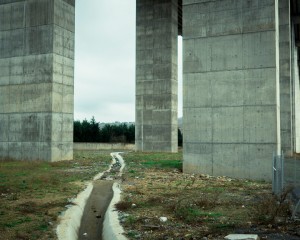 Water rushing in from the less saline and oxygen-poor Black Sea will alter sea currents and temperatures, according to research by Cemal Saydam of Hacettepe University, and destroy marine life in the Marmara which connects with the Mediterranean.

Istanbul’s northern forests, off-limits to development for centuries, are home to a water-catchment system that supplies almost half of the city’s 15m people with drinking water.

“Its trees are the city’s lungs,” says Akif Burak Atlar of Istanbul’s Chamber of Urban Planners. “The canal constitutes an almost inconceivable threat.” The loss of forests, water reservoirs and farmland means Istanbul will have crossed the sustainability “threshold”, he says. The city also sits alongside an active earthquake faultline.

Experts like Mr Atlar are excluded from official discussion about the canal, for which details remain scant despite its long gestation. Researchers can only scour an official report on its environmental impact made in November.

“The process has not been transparent,” says Mr Atlar. “The intensifying authoritarianism of recent years . . . has only accelerated, and civil-society participation has been proportional to the level of democracy.”

Mr Erdogan’s critics say Turkey cannot afford so many megaprojects and accuse him of pharaonic designs as he tightens his grip after a decade and a half in power. His supporters laud investments including thousands of miles of roads, new bridges, tunnels and rail tracks, for supporting the building sector and creating jobs. Such vast infrastructure projects feed a construction industry that accounts for about 10 per cent of gross domestic product, when related services are included.

Despite loan guarantees from the Turkish treasury, companies may struggle to find international lenders willing to put up cash for the canal, says Atilla Yesilada, an analyst at consultancy GlobalSource Partners — especially if emerging market bond liquidity dries up.

Private-sector debt in Turkey has already risen to 70 per cent of GDP, up from 33 per cent in 2007. Mr Yesilada thinks the project’s price tag may end up at double the government’s estimate.

The government will cough up at least 6.4bn lira ($1.4bn) this fiscal year just to cover shortfalls in revenue it guaranteed in other transportation concessions, partly due to the lira’s slide against the dollar, Mr Yesilada says. Stimulus spending ahead of the elections is also hurting public finances.

“Turkey faces an austerity programme in which we will tighten the belt until it becomes difficult to breathe. The only way to afford these megaprojects is to take away welfare from the constituency, and that is a tough choice for the government,” Mr Yesilada adds. 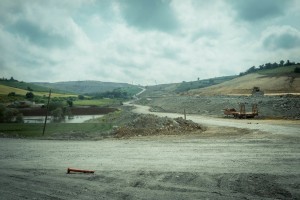 Whether or not the canal is ever built, opening up Istanbul’s hinterland to construction means “the ecological impact will be irreversible,” says Nuray Colak of the Northern Forests Defense, a group campaigning to save the area.

“At its core, the canal is a vehicle for real estate development. Once you permit that, it doesn’t matter whether the canal is completed,” she says. Already, up to a million of the forest’s 250m trees have been felled for the airport and highway, according to official figures.

Dust from the airport’s construction, about 5km away from Baklali, has covered Mr Yoldas’ wheat fields, reducing yields. The motorway has cut off pastureland for the buffalo, prized by Turks for their rich cream and yoghurt.

Herd numbers of the indigenous animal plunged 88 per cent nationwide between 1970 and 2015, according to research published in the Eastern Anatolian Journal of Science.

For now, the area is still blanketed with meadows blooming in early spring with wild flowers and yellow rapeseed. Storks migrating between Africa and Europe stop here to nest.

In the nearby town of Durusu, estate agents have posted images of futuristic settlements on the banks of a sapphire-blue canal. Mr Yoldas says neighbours have used money from the sale of farms to buy fancy cars and second homes in the city.

Despite rumours the village may be evacuated, Mr Yoldas refuses to go. “This land was left to me by my father and grandfather. A wise man never sells his land.”