In August a Danish law came into force banning face-covering veils. The move to ban burqas or niqabs has proven highly controversial and divisive. There were protests when the law came into force and the Scandinavian country experienced an extensive debate on whether it was discriminatory towards Muslims.

Polling by the Pew Research Center has found that in Denmark, 61 percent of people think Muslim women should face some type of restriction on their clothing, whether it’s banning garments entirely or just those that cover the face. In the Netherlands, the share saying there should be restrictions is the highest out of all 15 countries polled 81 percent. Portugal was most in favour of no restrictions with a 52 percent majority. 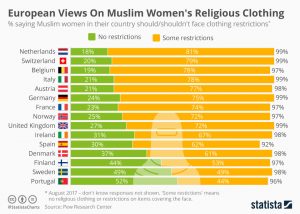