Greece recorded the highest rise among all countries in taxation increases with a 2.3% hike between 2015 and 2016. Romania, Austria, and Belgium were the champions in terms of tax cuts. 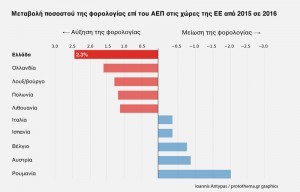 According to Eurostat data on EU Member States’ gross national income (GNI) tax ratios, Greece showed the largest rise out of all countries.
These data also revealed that the level of taxation in billions of euros as a ratio of GDP (also measured in billion Euros) has increased more than the other countries in the previous year, from 39.8 % in 2015 to 42.1% in 2016.
Unfortunately, Greece has the highest increase, followed by the Netherlands, Luxembourg, Poland, and Lithuania.