The events will take place in the Medieval City of Rhodes

A series of cultural events and exhibitions will be held at Argirokastro Square in Rhodes on August 19, on occasion of World Photography Day.
The events will be held in the Medieval quarters of the city of Rhodes to promote and honour the art of photography, as well as to support and develop arts as a whole, while also preserving and promoting local cultural heritage and tourism.

The event is co-organized by the Rhodes Amateur Photographer’s Club, which was established in 2015 and operates as a non-profit Amateur Photographer’s Club. The main focus of the club is the cultivation of communication and the exchange of views on the art of photography, as well as its dissemination and promotion through expression, entertainment, and amateur endeavours. The club is made up of 40 active members, who are expected to transform the atmospheric Medieval City of Rhodes into a stunning photographic setting.

According to some accounts, the first historically recorded photograph was taken by accident by the French inventor Nikiforos Niepes on August 19, 1816. The famous first photograph, known as “View from the Window at Le Gras”, is a heliographic image and the oldest surviving camera photograph. It was created by French inventor Nicéphore Niépce in 1826 or 1827 at Saint-Loup-de-Varennes, France, and shows parts of the buildings and surrounding countryside of his estate, Le Gras, as seen from a high window. 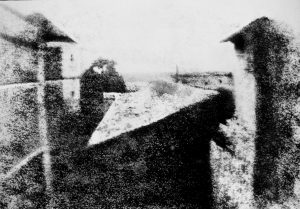 manually enhanced ‘View from the Window at Le Gras’