“The gesture was inopportune,” said Conti

AS Roma legends Roberto Pruzzo and Bruno Conti on Tuesday apologised for flipping Liverpool the bird in a photo widely posted on social media Monday.
The former centre-forward and the ex Italy winger, who were on the team that lost to the Reds on penalties in the 1984 European Cup Final, were pictured in front of the Liverpool emblem at Anfield with their middle fingers raised.
“The gesture was inopportune,” said Conti, who played a blinder in Italy’s 1982 World Cup win over West Germany.
“A moment of private fun was made public without my being aware, turning it into an inopportune gesture I feel I need to apologise for,” said Conti, now a Roma manager.
Pruzzo, a legendary Roma goalscorer, is now manager of Como in Serie D. 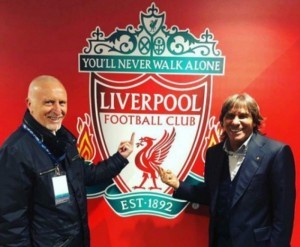