Facebook is thought of by most of us as a social media platform for browsing through the new trends, perusing the latest news headlines, checking out the status of our friends, really just ‘killing our time’. American Paleoanthropologist Lee Berger would probably not see it in that light at all, as he used the social media platform to help him discover a new human species! From CNN:

Hidden deep within the innards of a South African cave lay human evolution’s equivalent of Tutankhamun’s tomb. A treasure trove of 15 skeletons — eight children, five adults and two adolescents — all members of a previously unknown species of human ancestor.
In the field of paleontology, uncovering just one complete skeleton has been likened to winning the lottery, but lying here were over 1,500 fossils amounting to multiple jackpots.
This was the largest collection of hominin remains — part of the human lineage — ever discovered on the continent.
In 2013, American paleoanthropologist Lee Berger was tantalizingly close to finding them.
But there was a catch.
Separating Berger from this bounty of bones was a narrow passageway in the rock just 7 inches (18 centimeters) high, known as “Superman’s Crawl.” It was the only entrance and exit available to the fossils and would require superhuman powers to squeeze through it, particularly for a man of Berger’s stature.
The gap was roughly the width of a letterbox and was not really an option for Berger. But he found a way to get round it. 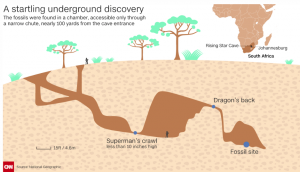 Berger posted a job description on Facebook calling out for skinny cavers to join his team at the University of Witwatersrand in South Africa. In reality, being skinny was not enough, as the soon-to-be employees would need to hold their breath in order to wriggle through the constricted passage. 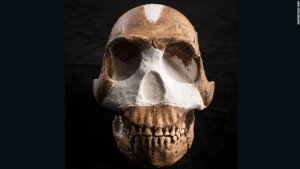 To Berger’s amazement, over 60 qualified applicants got in touch. In the end, he chose an all-female team of six. He called them his “Underground Astronauts”. 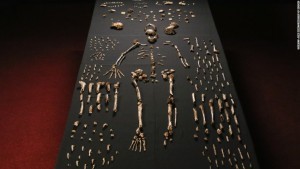 Together, they were about to bring home a baffling new addition to the human family tree.
True to its name, naledi was an out-of-this-world find — an intriguing mix of human and primitive features. 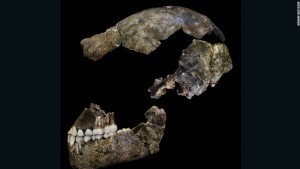 The unique ancestral species had human-like feet and long, slender legs primed to walk vast distances, yet also curved fingers and shoulders resembling that of an ape, which it may have used to climb and hang from trees. 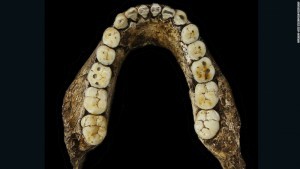 Naledi’s head was also a puzzling combination of advanced and primitive features. While the shape of the skull was remarkably humanesque, the brain was tiny — less than half the size of that of a modern human.