The tech sector is known for its particularly dynamic growth. However, once a company has reached a certain size, maintaining an upward momentum becomes a real challenge. Companies such as Microsoft and Apple have reached a size where posting single-digit growth is already an achievement, whereas younger firms such as Twitter are expected to grow at significantly higher rates until their businesses eventually mature.

Facebook is not exactly a new kid on the block, but the company continues to impress with its blockbuster growth. In the past quarter, its revenue grew by more than 50 percent, which is all the more impressive considering that the company has been maintaining this degree of growth for several years now.

As our chart illustrates, Facebook stood head and shoulders above its fellow tech giants in terms of revenue growth last quarter. Even though the company has warned investors that its growth will decelerate eventually, its shareholders are enjoying the ride while it lasts: Facebook shares went up nearly 400 percent over the past five years. 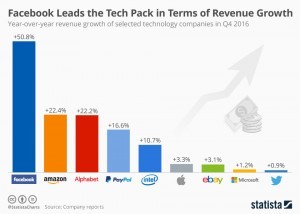