The YPG has about 50.000 Kurdish men & women fighting against IS in the north of the country

The father of the first British woman to die fighting against so-called Islamic State in Syria has launched a campaign to bring his daughter’s remains back to the UK.

Dirk Campbell’s daughter Anna traveled to Syria via Lebanon in 2017 to join Kurdish forces fighting in the north west city of Afrin.

In March last year, Ms Campbell died after it is thought she was hit during Turkish airstrikes while fighting with an all-female brigade of the Kurdish People’s Protection Units (YPG).

The 26-year-old was the eighth British citizen to die in the country but the first woman. 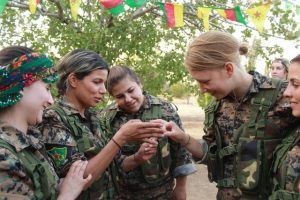 Mr Campbell, a musician from Lewes in East Sussex, has launched a legal campaign 18 months after his daughter’s death to bring her remains home from the now-Turkish controlled area.

He said his repeated appeals to the British and Turkish governments to repatriate Ms Campbell’s remains have failed, despite knowing the exact location of her body.