George Romero, whose classic “Night of the Living Dead” and other horror films turned zombie movies into social commentaries and who saw his flesh-devouring undead spawn countless imitators, remakes and homages, has died. He was 77.
Romero died Sunday following a battle with lung cancer, said his family in a statement provided by his manager Chris Roe. Romero’s family said he died while listening to the score of “The Quiet Man,” one of his favorite films, with his wife, Suzanne Desrocher, and daughter, Tina Romero, by this side.
Romero is credited with reinventing the movie zombie with his directorial debut, the 1968 cult classic, “Night of the Living Dead.” The movie set the rules imitators lived by: Zombies move slowly, lust for human flesh and can only be killed when shot in the head. If a zombie bites a human, the person dies and returns as a zombie.
Romero’s zombies, however, were always more than mere cannibals. They were metaphors for conformity, racism, mall culture, militarism, class differences and other social ills. 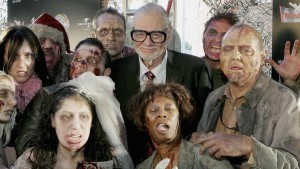