A hospital in China has been accused of forcing its female medics to shave off their hair to show their determination to fight the novel coronavirus before being sent to Wuhan to treat patients.

Trending footage shows around a dozen nurses having their long locks shorn at a send-off ceremony and many of them can be seen having tears in their eyes. 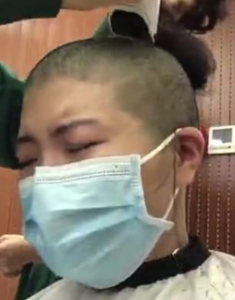 The clip sparked an uproar among web users, with many of them criticizing the hospital’s requirement. The hospital later claimed that all of the workers had volunteered to go completely bald as a way to prevent infection.

The controversy began when local newspaper Gansu Daily uploaded the footage in question to its social media account on Saturday.

Fifteen female medical workers from Gansu Provincial Women’s and Children’s Hospital are seen getting ready to go to Wuhan in the clip and it is said 14 of them ended up have their heads shaven.

They were scheduled to leave the city of Lanzhou, which is the provincial capital of Gansu, the same afternoon.

The video shows some medics appearing reluctant while having their hair cut by a team of hairdressers. A few were pictured crying during and after the process.