If you begin from an extremist position and with fighting words, expect people to fight back

A Tumblr user, who refers to herself as ‘Feminist Chewbacca’ wanted to discover “the root causes of patriarchal domination in society”, and turned to the English language to investigate the inherent sexism it allegedly contains.

In these days of fake news and agenda pushing however, it has never been more important to check your facts. This is where Feminist Chewbacca came unstuck. Reblogging a post she had found on Visual Poetry, she had probably not counted on being fact-checked by an actual linguist. Her poorly chosen examples were deconstructed one by one, until she began to look rather basic, and a bit silly.

By introducing her post with the words: “Men fabricated the idea that they are the default sex to compensate for their biological inferiority and general superfluousness,” Feminist Chewbacca sets a militant tone that isn’t going to endear her to many people, and she needs to have rock-solid arguments to respond to the inevitable attacks on her position.

So what to take from this sordid affair? Well, I guess it’s easy to pass off someone else’s arguments as your own, but at least maybe check if they are factually correct first. Also, if you begin from an extremist position and with fighting words, expect people to fight back. If they come armed with facts and you are just regurgitating opinions that suit your political outlook, you are just asking to be made to look stupid.

Scroll down to check out how it unfolded below, and let us know what you think in the comments! 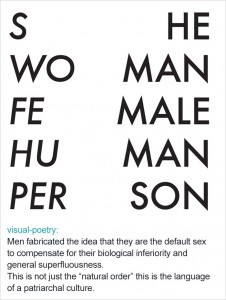 (Tumblr user ‘Feminist Chewbacca’ picked up artwork that resonated with her beliefs, that sexism is rooted in language) 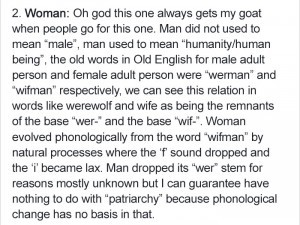 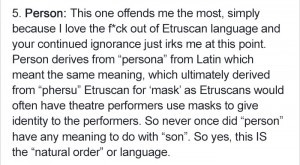 (But this linguist wasn’t having it, and wrote a detailed and qualified response)