Mount Athos is believed to be a blessed site by the Orthodox Christian faithful. An old photo of a group of monks on the Monastery of Panteleimon (merciful), also known as the Russian Monastery due to the origin of the monks, shows a mysterious figure believed to be the Virgin Mary herself.

The photo was taken with an old camera obscura in 1903 by monk Gabriel on the day of the celebration in honour of Panagia, the mother of Christ. The chapel bells were sounding joyously, as the monks were readying to offer charity to the poor and destitute monks living as hermits known as “keliotes”, in small remote caves on the mountain. After taking the photo, to his astonishment, monk Gabriel saw something miraculous! Among the monks was a dark-haired figure. He did not hesitate. He began to photograph the snapshots. And then what he only saw was imprinted on the paper of the time. The photo was revealed among the archives of the Monastery in 1997.
According to the Athonite tradition, the Blessed Virgin Mary was sailing accompanied by St John the Evangelist from Joppa to Cyprus to visit Lazarus. When the ship was blown off course to then-pagan Athos, it was forced to anchor near the port of Klement, close to the present monastery of Iviron. The Virgin walked ashore and, overwhelmed by the wonderful and wild natural beauty of the mountain, she blessed it and asked her Son for it to be her garden. Unlike many of the Christian protestant traditions in the west, Orthodox tradition believes that miracles are possible even today. 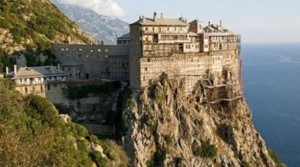 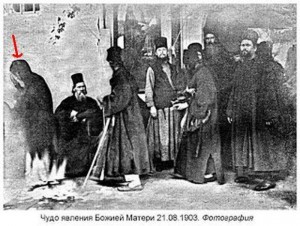