A female firefighter is suing her former department after claiming she was fired over photos posted to her Instagram account.

Presley Pritchard, a former firefighter paramedic with the Evergreen Fire Rescue in Kalispell, Mont., said she was let go from her job last August after being “directly targeted due to how I looked in my gym attire,” among other factors related to her social media presence. She has now filed a wrongful termination lawsuit that accuses her superiors of gender discrimination, the Daily Inter Lake reports.

Late night gym sesh and squatted 225 lbs for 10 reps somehow (in a caloric deficit 😯) I blame it on the @1upnutrition Sports Amino 😏 Anyways, code PRESLEYKP saves ya 20%. Let’s kill this week 🤜🏼

Pritchard’s lawsuit states that she was unfairly singled out for her status as a fitness influencer. The 27-year-old has nearly 100,000 followers on Instagram, where she typically shares photos and videos of her workout routine as well as inspirational messages and posts promoting her several partnerships with wellness brands.

But that online presence, which Prichard has contended was completely separate from her job, began causing issues in 2018, when Jack Fallon, a member of the Evergreen Fire District Board, began raising concerns about the account. Pritchard told VIce that those concerns continued throughout the following year.

Anyone else feel like 2020 been testing them lately or is that just me!? 🤨. 🤓2032 is gonna be my year. Just you wait.. – Jokes aside; If you want 2020 to be your year, Don’t sit on the couch and wait for it. Go out & make a change. Smile more. Be excited. Do new things. Unfollow negative people on social media. Post the swimsuit pic. Workout. Go to bed early. Wake up early. Show more gratitude. Ignore the haters. Practice self care. – Don’t settle for basic baby, Extraordinary is where it’s at. . . . . DM for coaching inquiries @cnc.apparel || code: presleykp @1upnutrition || code: presleykp @ninelineapparel || code: presleykp @herbstrong || code: presley15 @warriorflask || code: presleykp

“It was just ongoing — they would call me in for everything,” she said. “It was just always like walking on eggshells there.” 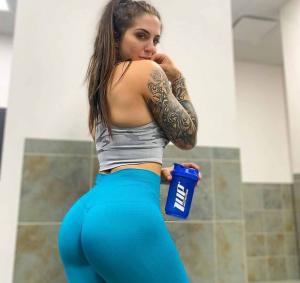 The firefigther told Vice she was reprimanded about 20 times for issues involving her account, including what she wore to the gym and in other photos on the page. Most of Pritchard’s photos feature her dressed in workout clothes, but others show her in bathing suits, posing with friends or shooting guns.

Read more: In The Know