Fires burn in Egaleo and Gytheio

UPDATE: The number of hotels and that have been evacuated has been increased.

A total of more than 70 people have been evacuated from the nearby beaches by the Coast Guard.

A fire burns in Gytheio, Peloponnese where 25 firefighter operate with 12 vehicles. Two PZL firefighting airplanes and one helicopter were operating until late in the afternoon.

A fire in Samos, near Pythagorion, broke out on Saturday afternoon.

The fire burns a forest area in Mesokampos and four fire-fighting airplanes and two helicopters immediately took off. A total of 21 firefighters operate with 10 vehicles. 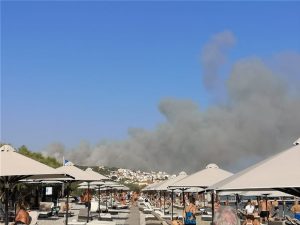 According to the island’s mayor Christodoulos Sevastakis, two hotels in the area have been evacuated for precautionary reasons.

At 18:30 the Fire Brigade was reinforced and 31 more firefighters operate in the area with 13 vehicles. At the same time, 88 volunteers with 27 vehicles are on site assisting in the firefighting efforts. 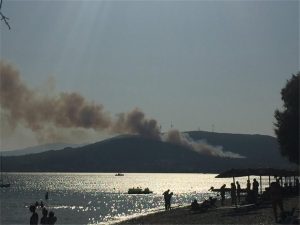 In the same time, the situation in a forest fire in the regional Egaleo, near NATO Avenue, is improving.
Immediately 25 firefighters with 15 vehicles were immediately mobilized along with 10 firefighters, 1 group of firefighting rangers and 2 helicopters.Meanwhile, two firefighters were slightly injured when the vehicle they were on was overturned shortly before the 5th exit of the NATO Avenue. The firefighters were heading towards the Egaleo district for the ongoing fire at the site. 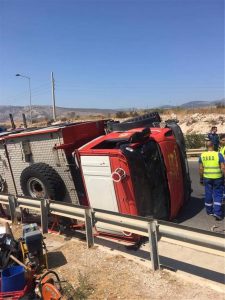