Cyprus has just acquired its first offshore patrol vessel (OPV) which arrived in Larnaca on Tuesday.

The ship was built in Haifa, Israel following an agreement between the two countries, while Cyprus Defence Minister Christoforos Fokaides visited Israel last September to attend the launch ceremony. 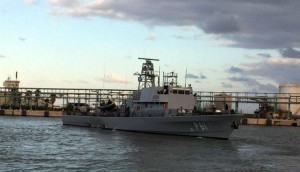 The patrol vessel will be officially enlisted in Cyprus’ National Guard on January 15 at the Evangelos Florakis Naval Base in Paphos, as was announced by the Cypriot Defence Ministry.

The ship, which is 62 meters long and 8 meters wide and cost approximately €44m, is expected to reinforce the island’s navy in safeguarding the broader area more effectively. Its equipment includes weapons and it can carry anti-aircraft missiles, while its speed capacity is 32 knots.

Since September, 30 Cypriot navy members have been undergoing training for the OPV.