It will be partly submerged in the sea

Architecture firm Snøhetta has revealed plans to build a restaurant in southern Norway that will be partly submerged in the sea to give diners a glimpse below the waves.
Described by the Oslo- and New York-based firm as “Europe’s first underwater restaurant”, the building will comprise a rugged concrete box with half of its body on the coastline, and the other half sunken underwater.
Its primary use will be as a restaurant for up to 100 people, but it will also function as an marine research centre and as an artificial mussel reef.
Once inside, visitors will be able to look through a huge panoramic window to observe sea life at first hand.
“More than an aquarium, the structure will become a part of its marine environment, coming to rest directly on the sea bed five meters below the water’s surface” said Snøhetta.
“Like a sunken periscope, the restaurant’s massive acrylic windows offer a view of the seabed as it changes throughout the seasons and varying weather conditions.” 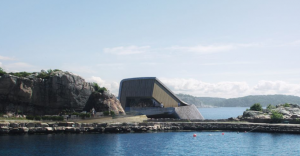 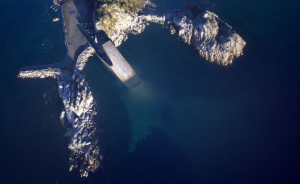 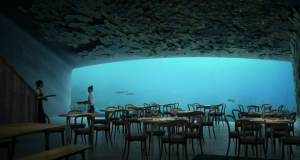 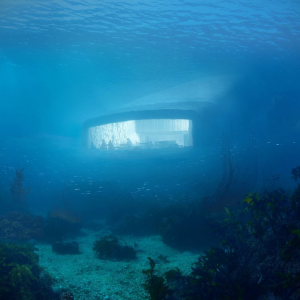