You might not have noticed it or even realized it but the September equinox happened on Saturday (September 22) and it’s peaked a lot of interest from Flat Earthers.

The equinox happens when the Sun crosses south over the celestial equator which signifies the beginning of autumn and the start of shorter days and longer nights (oh happy days).

The same thing happens in reverse in March at the start of the summer season.

Obviously, in order for this to happen, the Earth needs to be a spherical shape as this seasonal change is all dependant on the axial tilt of the planet.

Therefore there is no way that the Earth could possibly be flat as how would the sun possibly pass the equator and begin autumn?

However, those good ol’ Flat Earthers have an explanation for everything and in this instance, they reportedly believe that the sun is actually shrinking.

Despite wide evidence telling us that the sun is over 92 million miles away from the Earth and has a radius of 432,289 miles.

Flat Earthers though are of the understanding that the Sun has a radius of just 3,000 miles, which is actually pretty small when you think about it.

In order to get a better grasp of this concept, it’s important to know that Flat Earthers believe that the sun sits directly above the Earth and orbits around the North Pole.

Confused? Thought so. Probably best to look at the picture below from the Flat Earth Society to get your head around this one. 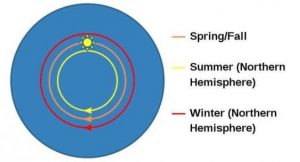 You’ve probably already realized that this doesn’t make sense whatsoever as it would suggest that the sun never really sets and could never actually dip below the horizon.

For this theory to actually work it would require a lot of impossible physics and the literal bending of light as the below video attempts to highlight.