Several schools in Attica will remain closed tomorrow, Friday due to the bad weather

The heavy rainfall has caused traffic jams with vehicles stuck for kilometres on the main roads of the basin.

Drivers are also experiencing great problems downstream to Kifissia. The cars have been immobilised from the height of the KTEL to Attiki Odos.

Shortly after 4 pm, traffic was stopped at the intersection of Markopoulou and Elpidos streets in Markopoulo and L. Katsoni street from the Vryoulon bridge to Perikleous street. Due to the accumulation of water, the traffic was stopped on Olympionikon Street in Glyka Nera, downstream of Spata.

The severe weather system “Ballos” is in progress, with rains and thunderstorms in a large part of the country.

Heavy rains and thunderstorms are expected in Attica from noon today until noon on Friday 15/10, while there is a possibility of hail.

“Ballos”, started from late Wednesday night, in many parts of the country, and hit Attica on Thursday morning. 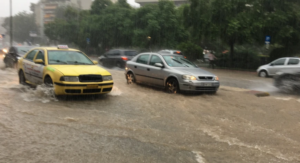 The heavy rainfall caused traffic jams on the main roads. At the same time, according to the latest information, due to the accumulation of water, the traffic on Poseidonos Avenue in the stream to Athens was stopped in the traffic stream to Syggrou. 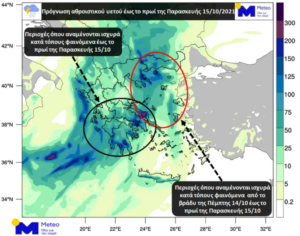 A similar picture in Petrou Ralli in the flow of traffic to Piraeus and from the height of Hamosternas Street in the stream to Athens. 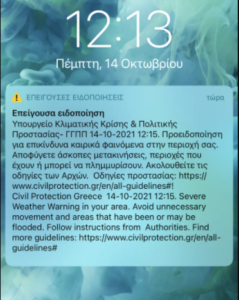 The Fire Department has received 110 calls for flooded basements and 8 for cutting down trees in various areas, mainly in the southern suburbs and in New Philadelphia, Kato Patisia, Peristeri, Moschato, Nea Ionia and Kifissia.

In New Philadelphia, the school complex on Ephesus Street was flooded, where students were forced to build…a bridge with desks to get out of the classrooms. 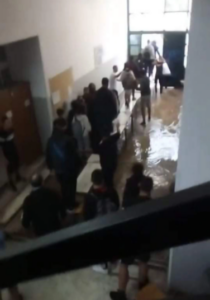 The students went to an another floor, while the fire brigade pumped out the water. 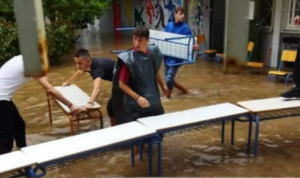