As seen through the eyes of the Israeli Air Force

Dozens of Italian, American, Hellenic and Israeli fighter jets spent the past week flying over the snowy peaks and wide fields of Greece. They learned defense, offense and evasion in tandem, in what is considered one of the largest overseas Israeli Air Force exercises. 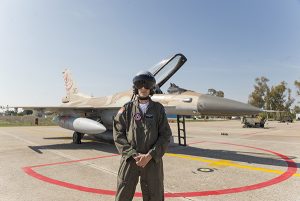 Four F-16 aircraft adorned with the Israeli Air Force’s insignia are located on the runway of Andravida AFB in Greece. In several minutes, they will take off on a training sortie, but now they are waiting for their partners: the Hellenic Phantoms, Mirages and F-16s, the United States European Command’s (EUCOM) F-16s, and the Italian Tornados and F-35s. The Israeli “Barak” (F-16 C/D) then take off, soaring high over the snowy peaks of Greece, headed towards one of the largest overseas Israeli Air Force exercises. 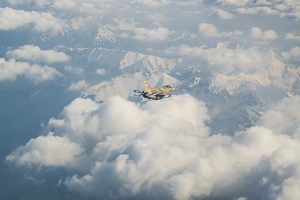 Over the past week, the IAF’s 109th (“Valley”) and 117th (“First Jet”) Squadrons participated in the “Iniochos” 2019 exercise. Dozens of aircraft from various nations drilled defense, offense and evasion, learning how to become better combatants. “This exercise is significant for us. The IAF showed its capabilities in force, coordination and adjustment according to the theaters at hand, as well as the capability to debrief and improve along the exercise”, said Col. A’, Commander of Ramat-David AFB. 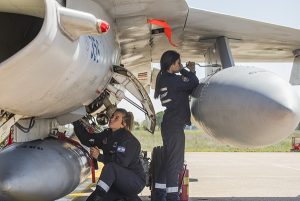 A formation of “Blue” aircraft fly low on their way to strike an airfield belonging to the enemy – the “Red” forces. The threat is challenging, and the complex mission requires tight cooperation between aircrews from different countries, unaccustomed to flying together. “We acted as both ‘Blue’ and ‘Red’ forces at the same time. Each side is unaware of the others’ plans; every day, each division takes a whole day to come up with the best possible plan, and the results are then examined in the debrief”, elaborated Lt. Col. A’, the deployment commander and the Commander of the 117th Squadron.