A court in Skopje has sentenced today the former Prime Minister of FYROM, Nikola Gruevski, to two years in prison. The former PM is accused of exerting his influence in several unlawful decisions as prime minister. These decisions include the purchase of an official Merecedes for 600 thousand Euros.

The court said that Gruevski had ordered the Interior ministry to purchase the armoured vehicle.

Meanwhile, the court also sentenced to 6 years in prison the former deputy minister of Interior, Gjoko Popovski. Gruevski was not present in the court when the verdict was handed, but he was represented by his lawyers. Outside the court, a group of his supporters protested against his conviction. 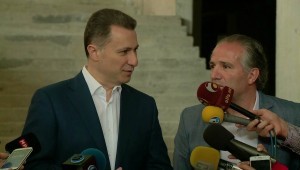