Over 80,000 protested against hike in fuel prices

Police in Paris have used tear gas and water cannon to disperse protesters demonstrating for a second weekend against rising fuel prices.
Violence erupted on the Champs-Elysées as protesters tried to get through a security cordon around sensitive sites.
About 5,000 protesters had converged on the avenue. At least 18 people were arrested after clashing with police.
Organisers of the “yellow jacket” movement billed the latest protests as “act two” in their rolling campaign.
Named after their distinctive high-visibility attire, the protesters oppose an increase in fuel duty on diesel.
Demonstrators on the Champs-Elysées came up against metal barriers and a police-enforced perimeter designed to stop them reaching key buildings such as the prime minister’s official residence.
Some erected barricades, ripped up paving stones and threw them at police, while shouting slogans calling for President Emmanuel Macron to resign.
Interior Minister Christophe Castaner accused them of being influenced by the leader of the far-right National Rally party, Marine Le Pen. But she accused him, on Twitter, of dishonesty.
By late afternoon, the situation on the Champs Elysées remained chaotic, with several fires still burning.
Demonstrations have been held in many other cities – including Lille, Lyon and Bordeaux – with a number of minor clashes and arrests reported.
The interior ministry has put the total number of protesters at 81,000 so far – fewer than the first day of yellow jacket demonstrations, which drew some 280,000 people a week ago.
Meanwhile a march against sexual violence was kept well away from the unrest over fuel prices in Paris. 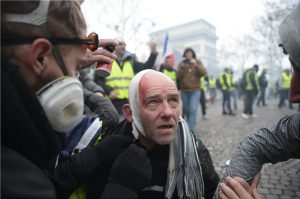 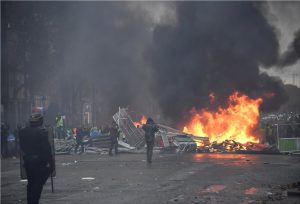 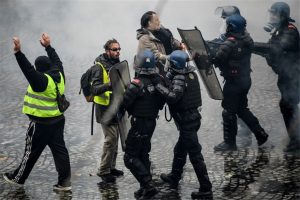 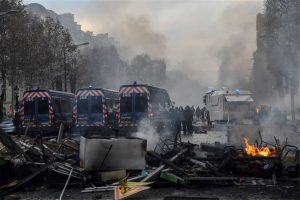 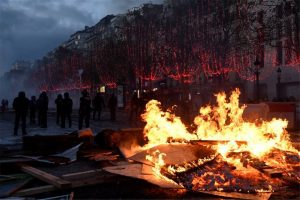 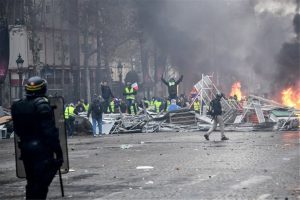