George Soros’s foundation is closing its office in Budapest and moving to Berlin, leaving what it called “an increasingly repressive political and legal environment” in Hungary.

The organization made the announcement Tuesday, a day after the right-wing government of Prime Minister Viktor Orban announced it would tighten restrictions on non-governmental organizations, under a law dubbed the “Stop Soros” bill.

Orban, who won a landslide election victory last month, has repeatedly accused the Hungarian-born Soros and his organization of encouraging migrants and undermining the national culture.

But it would move its Budapest-based international operations and staff to Germany.

“The government of Hungary has denigrated and misrepresented our work and repressed civil society for the sake of political gain, using tactics unprecedented in the history of the European Union,” OSF president Patrick Gaspard said in a statement.

In power since 2010, Orban has increased his control over the media and put allies in control of formerly independent institutions, while his stand on refusing to accept large numbers of migrants in Hungary has also put him in conflict with the EU.

Orban and Soros have clashed over the 2015 European migration crisis. Orban says Soros is out to undermine Europe’s cultural identity while the billionaire has accused him of running a “mafia” state.

The NGO legislation is expected to be one of the first laws passed by the new parliament. 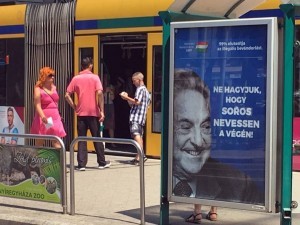 (A Hungarian government billboard featuring George Soros, with the words translated to ‘Don’t let George Soros have the last laugh,’ at a transit stop in Budapest on July 6, 2017)

It would allow the interior minister to ban any NGOs active in the immigration field deemed to pose a “national security risk”. It would also impose a 25-percent tax on foreign donations to NGOs that back migration.

The Central European University, founded in Budapest by Soros in 1991 after the fall of communism in eastern Europe, said on Tuesday it would stay in the Hungarian capital despite the OSF decision to leave. The CEU, because it issues international degrees, has had to adapt to a new law which required it to open a campus in the United States.

Its rector, former Canadian Liberal Party leader Michael Ignatieff, said new students in 2019 might have to enroll across the border in Austria if the CEU fails to strike a deal with Hungary under the new law, which sparked street protests and an EU legal challenge.

In a statement on Tuesday, Ignatieff urged the Orban government to recognize that CEU now met conditions stipulated in the new law. “CEU cannot go into another academic year in a situation of legal uncertainty,” he said.