Angela Merkel is heading for a fourth term as Germany’s chancellor after her centre-right CDU party and its CSU sister party won 32% of the vote, initial exit polls have projected.

The estimation puts the Christian Democrats comfortably ahead of their outgoing coalition partner and main rival, the Social Democrat SPD party led by Martin Schulz, which ended a miserable campaign with just 20% – a near rout.

As predicted, the right-wing AfD has spoiled the chancellor’s party, clearing the 5% parliamentary threshold for the first time in its four-year history with a score of 13%, making it the third largest party in the Bundestag. 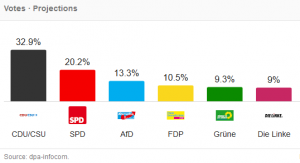 The smaller, pro-business FDP party, Merkel’s favoured coalition partner, looks set to return to parliament after missing out in 2013 with a share of 10%, while the Green party won 9% and the left-wing Die Linke 9%.

Angela Merkel will now have to form a coalition government – an arduous process that could take months – after sliding to about 32% of the vote from 41.5% in in 2013.

The SPD’s 20% score is a new new post-war low and the party has now formally ruled out the possibility of a new “grand coalition” with the Christian Democrats: deputy leader Manuela Schwesig has said the party will go into opposition.

An alternative coalition for Merkel would be a three-way tie-up with the liberal Free Democrats (FDP) and the ecologist Greens, a combination that has not yet been tested at national level known as the “Jamaica” option – the three parties’ colours are those of the black-gold-green Jamaica national flag.

Both the FDP and the environmentalist Greens have played down the prospect of a Jamaica coalition, but as they have been out of government for four and 12 years respectively, they may be lured into an alliance by the prospect of power.

The SPD’s decision also means the AfD will not be the official party of opposition in the Bundestag.