Greek Freak is best selection for players involved in game

American sports network ESPN posted its picks for NBA’s fantasy draft for season 2018 and the Greek Freak, Giannis Antetokounmpo is at the top of the list. “The Greek Freak was the only player in the NBA to average 1.5 steals and 1.5 blocks in 2016, not bad for a player who has seen his scoring average increase by more than four points per game every season of his career. In fact, the production across the board has been on the rise since we first got to know Antetokounmpo in 2013, and there is little reason to think that stops in 2017-18. He shot just 32.1 percent from outside of 8 feet last season, something that could be viewed as a flaw or room for significant growth for a player who doesn’t turn 23 until December.”, writes the channel’s 2018 outlook. The Milwaukee Bucks player is followed by Russel Westbrook of the Oklahoma City Thunder and James Harden from the Houston Rockets, while Cleveland Cavaliers Lebron James is the 9th pick. 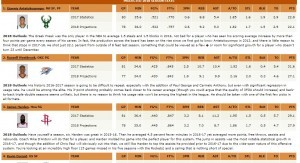