While Google’s hardware ambitions are still limited and widely considered a means to an end (which is to collect more data and sell more advertising), the range of the company’s products and services has widened significantly over the years. Along with the company’s “Other Bets”, i.e. businesses unconnected to Google’s core products such as Access, Calico, CapitalG, GV, Nest, Verily, Waymo and X, this can also be seen as part of a broader pivot away from its reliance on advertising towards becoming a more diversified company.

As the following chart illustrates, Google’s many side-activities have steadily grown over the years and in 2017, the company’s non-advertising revenue reached $15.5 billion, up from just $667 million in 2008. More importantly, though, the percentage of Google’s revenue that didn’t come from advertising sales grew from 3.1 percent in 2008 to 14 percent last year, indicating that the search giant can no longer be considered a one-trick pony. 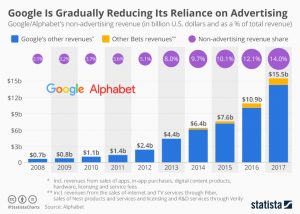