An assault on members of the Hellenic Coast Guard during a drug raid in Athens on April 4 highlights a growing problem in Greece. Some opponents of the far-left Syriza-led government attribute the increasing drug traffic in the country to a dangerous alliance between political anarchists and illegal immigrants. The anarchists might be considered the Greek equivalent of the “far left”. According to Reuters:

“Many self-proclaimed anarchists – the word stems from the Greek ‘anarchia’ or absence of authority – say they are pacifist, but certain groups have few qualms about using violence. Six years of recession have fuelled a new wave of left-wing militancy, according to officials, anarchists and court testimony.” 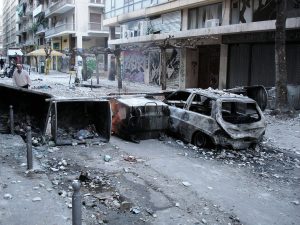 (A street in Exarchia, Athens -not Kabul…- following a riot, in December 2008)

The April 4 incident was sparked when Greek authorities arrested a Syrian national on a ferry at the Piraeus Port; he was carrying 200 grams of marijuana, which he said he had purchased from an Egyptian drug dealer in the Exarchia neighborhood of Athens.