Despite longer working hours, this did not result in higher levels of productivity

By contrast, GDP per hour worked is $99.5 in Ireland, $83.1 in Norway and $72.2 in Germany. That’s despite all three of those countries working less hours per year on average than the ones mentioned above. That certainly reinforces the idea that a four-day working week could boost productivity and match current economic output. That was trialled by a company in New Zealand in July and concluded that a four-day working week resulted in a drastic improvement in work-life balance, productivity, heightened commitment, and lower stress levels. 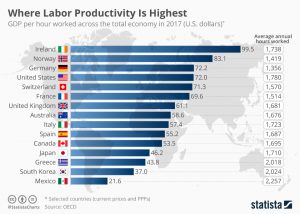