Iraq and Myanmar among top charitable and generous countries

Although torn by civil war, Iraq is the world’s most generous country towards strangers in need, according to a new global index of charitable giving.
Eighty one percent of Iraqis reported helping someone they didn’t know in the previous month, in a global poll commissioned by the Charities Aid Foundation (CAF). Despite Greece’s reputation as being a generous nation, the country was 4th from the bottom among the 140 countries included in the study with a rating of 19. Only China, Palestine and Yemen were worse than Greece. The study does not explain the reasons for the varying levels of generosity among the countries. country being more generous than others. In terms of donations to charity, Myanmar held the top position, with nine out of ten surveyed saying had they given during the previous month. 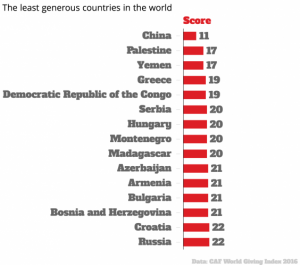 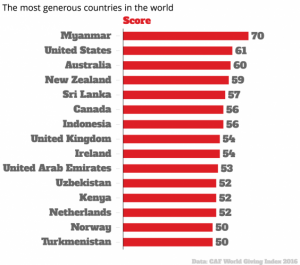