Greece is among the top 20 travel destinations for German tourists, according to fvw tourism magazine. The data showed an 11.7% rise in arrivals to Greece in 2017 compared to 2016, placing Greece in the 8th spot in the preferences of the Germans, having attracted 3.14 million people. Austria, France and Spain were in the top 3 spots. 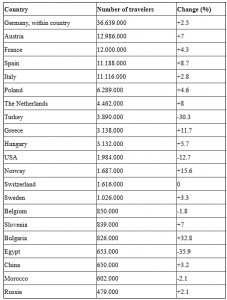