The two men were arrested in Thessaloniki, northern Greece, on Wednesday under a warrant issued by FYROM.

The FYROM Interior Ministry on Thursday said it had not received an official note from Greece about their arrest, but, once it happens, it will make arrangements for extradition.

The two men from the secret service, the UBK, were initially indicted in two cases related to the wiretapping scandal instigated by the Special Prosecution, SJO, which has been tasked with investigating high-level crime in FYROM.

They were among those charged with illegally wiretapping thousands of people through misuse of police surveillance systems in a case codenamed “Fortress”.

They were also indicted for the destruction of one of the secret police systems that was allegedly used for the illegal surveillance in a case codenamed “Target”.

The trials in these cases, which meanwhile have merged into one, has already begun in the Skopje Criminal Court.

Both men are yet to submit their pleas to the charges against them. 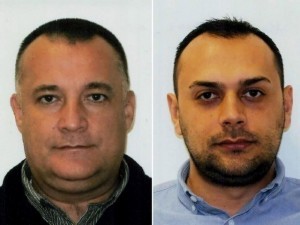 Grujevski and Boskoski had been on the run for three months after the Skopje Criminal Court ordered their detention on July 18.

They escaped after the court took an entire day to deliver the detention order to the police.

During this time, the detention order was released to the public, giving the two fugitives time to flee.

The delay and flight sparked suspicion that officials had helped them escape – a matter that Interior Minister Oliver Spasovski previously said is the subject of a separate investigation.

A police investigation showed that Grujevski had obtained a second, fake, identity, issued by the authorities, which might have helped him during his escape.

Revelations about the scandal became the focus of a long-running political crisis that only ended in May this year with the election of new Social Democrat-led government.

On June 17, in relation to the wiretapping allegations, the SJO sought the detention of the former secret police chief, Saso Mijalkov who is also a cousin to the former Prime Minister Nikola Gruevski, as well as for several other Mijalkov associates, including Grujevski and Boskoski.

The court refused the detention request for Mijalkov, but eventually accepted the requests for his two associates, who then fled.

The trial in this case, which has begun, is due to resume on November 2. If the two fugitives are extradited by then, they will likely appear at this session.

Their testimonies may shed important light on one of the key questions at the heart of FYROM’s long-running political crisis: who was responsible for the mass illegal wiretapping operation.

“[Their testimonies] will have a serious impact. They might cause tectonic shifts inside the [former ruling VMRO DPMNE] party [of Nikola Gruevski], especially for those officials who are being investigated by the SJO,” Ljubomir Gjurcevski, a former police chief in the Interior Ministry told Deutsche Welle on Thursday.

Former Prime Minister Gruevski was accused by the then opposition Social Democrats, SDSM, of masterminding the surveilance of some 20,000 people, including his own ministers, together with his cousin Mijalkov.

He has denied the accusations.