“Embark on a journey to explore Greece and Greece will reward you”, says travel author Paul Hellander

Despite the fact that globally, the Greek islands are considered a leading tourist destination that guarantee warm weather, legendary natural light, pristine waters, delicious traditional Greek cuisine, endless cultural pursuits, breathtaking scenery and famous hospitality, Greece’s mainland is endowed with some of the most scenic and intriguing regions and towns waiting to be explored by those visitors who dare to get off the beaten tourist track and aim for an alternative and memorable Mediterranean holiday.

Representing an intoxicating mix of history and edginess with equal measures of grunge and grace, bustling Athens has it all.

Long considered the cradle of Western civilization and the birthplace of democracy, where whispers of philosophy, politics, and arts blend with modern-day stories, the city has transformed into a modern cosmopolitan metropolis and the financial, political, cultural, and economic center of Greece.

With a population of almost four million people, the undisputed historical capital of Europe is Greece’s largest city, where arts and culture are encountered everywhere and iconic monuments mingle with first-rate museums, cosmopolitan cafes, al fresco gourmet dining, a thriving night-life scene and beachside suburbs. The historic center is an open-air museum, yet, the city’s cultural and social life takes place amid these ancient landmarks, with the magnificent Acropolis rising above the sprawling metropolis and eternally witnessing the city’s transformations.

Despite the current financial crisis, post-Olympics Athens is conspicuously more sophisticated and cosmopolitan than ever before. New freeways, an ultra-modern metro rapid-transport system and an easily accessible and state-of-the-art airport welcome an astonishing 20 million visitors a year, almost double the country’s population. In order to accommodate this influx of visitors, Greece also has the highest number of international airports in the world, and comprehensive English signage makes the country welcoming and easily accessible to everyone.

“You can’t leave Athens out of Greece’s must-see mainland destinations as it is perhaps the most important one and requires an inevitable and recommended stop over for a day or two,” says travel researcher, author, and photographer Paul Hellander. 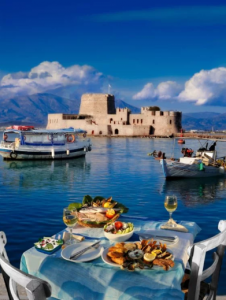 Drenched in history, culture, green landscapes and crystal-clear oceans and set in one of Greece’s most diverse and vibrant regions, the Peloponnese, the historical all-time favourite seaside town of Nafplion, near the north end of the Argolic Gulf, is the perfect destination for those who wish to experience traditional Greek life, immerse themselves in Greek history and relax amongst splendid virgin landscapes, centuries-old traditional villages and neoclassical buildings.

“[A] Classy weekend retreat for the Athenians and international travellers looking for a taste of urban country close to Athens, Nafplion has always been a popular town, so much so, that the newly liberated Greek Kingdom of 1823 chose it as the country’s first capital and it remained so for some 11 years,” says Hellander.
Distance from Athens: 140 km.

“The third of the triumvirate of must-see archaeological sites. Olympia is a small destination in itself but is drenched in history whilst it is also well-situated for touring in the west Peloponnese,” notes Hellander.
Distance from Athens: 270 km.

The medieval castle town on the South Eastern coast of the Peloponnese is raw, wild, and rich in history. Its profound romanticism and fairytale atmosphere ranks Monemvasia as a major attraction for those who choose to exchange their wedding vows on this legendary rock. According to historians, Monemvasia was inhabited and became a strategic fortress claimed by the Byzantines, Franks, Venetians, and Ottomans. It is purported to be the only castle in Europe that has never ceased being inhabited.
Distance from Athens: 324 km.

Built on the site of ancient Pharai, Messinia’s capital and the second largest city in the Peloponnese was often overlooked by travelers who used to blitz through it and hurry on to Mani.

After the catastrophic earthquake of September 1986, Kalamata took years to recover but has rebounded to become a popular destination for the young who wish to combine good food, shopping, stunning beaches and explore museums and beautifully restored neoclassical buildings with interesting art deco. Kalamata’s generous marble-paved rectangle square with adequate room for trees and flowerbeds, buzzing cafes, children in strollers, and teens showing off with bike wheelies and skateboards beyond midnight make Kalamata a bustling city and a ‘must-see’ destination.

“The pretty fishing ports of Methoni, Koroni and Finikounda, with their transport links to Crete, make Kalamata even more attractive to overseas visitors who wish to combine mainland with island life,” says Hellander.
Distance from Athens: 240 km. 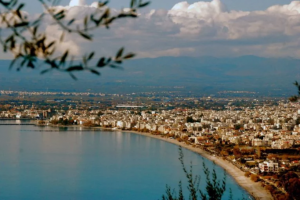 Considered by the ancient Greeks as the center of the world, and designated as a UNESCO World Heritage site since 1987, the ancient town and seat of the most important Greek temple and Oracle of Apollo is one of Greece’s must-see archaeological sites.
Distance from Athens: 145 km.

Although Nafpaktos is considered the most beautiful and picturesque town in the district of Aitoloakarnania and one of the best on Greece’s mainland, it is not widely known to international tourists. This coastal town in western Greece is a popular all year-round destination for Greeks due to its proximity to Athens and is a favourite destination as it combines sea with mountain.

Built on the top of a hill, the castle of Nafpaktos, one of the largest and most well-preserved fortifications in Greece, offers a breathtaking view of the famous Rio-Antirio bridge and the Venetian Harbour.
Distance from Athens: 220 km.

Along with Nafpaktos, Galaxidi is considered as one of the most scenic and romantic destinations of the Greek mainland. Hidden amongst the stunning mountainous landscapes of Fokida, Galaxidi offers cobbled narrow streets drenched in colourful facades, marble gate arches, yards with flowers and pebble beds, as well as ancient monuments and traditional churches.
Distance from Athens: 220 km. 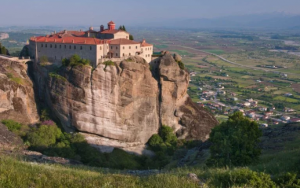 Meteora in central Greece is a huge Eastern Orthodox monastic complex unlike anywhere else in the world, featuring monasteries more than 500 years old on top of an unearthly landscape of massive pillar-like mountains and columns. Six of the monasteries are open to the public for those who are willing to take on the challenge and climb all the way to the top. Those who have managed to do so vow that the experience is totally worth it.
Distance from Athens: 355 km.

Located at the foot of the peninsula of Pelion in the center of Greece, the city of Volos is situated equidistant between the country’s capital, Athens, and the second major city, Thessaloniki. Founded in the middle of the 19th century, Volos is considered the political and economic capital of the prefecture, and remains the main export center of Thessaly. Housing two universities in the heart of the city, with many paved streets that crisscross the city, Volos is an extremely lively town with a breathtaking waterfront lined with pastry shops, cafes, bars, restaurants and mezedopolia, where locals and visitors can take a stroll before dinnertime.

“The port of Volos is a very active hub with daily schedules to the islands of the Sporades; Skiathos, Skopelos and Alonissos. Volos is also a necessary stop on your way to Pelion peninsula villages that are a favourite destination for travelers,” says Hellander.
Distance from Athens: 330 km.

Epirus lies in northwest Greece between the Pindos mountain range and the Ionian Sea, where visitors can explore wild landscapes with great virgin forests and experience a plethora of activities such as canoeing, kayaking, and rafting in the untamed waterways, mythical mountain lakes (Dragon Lakes), and challenging rivers that drench the whole region.

“Visitors’ options here are unlimited with the group of the 46 villages called Zagorochoria, picturesque Metsovo, and the Epirus Riviera with its three jewels Parga, Preveza, and Syvota which combine an impressive mountainous and charming seaside scenery trenched with olive groves, ancient ruins, and sapphire beaches.

“Ioannina is a bustling picturesque town, the key to the gateway to the northwest and certainly one of my favourite destinations in Greece,” says Hellander.
Distance from Athens: 420 km. 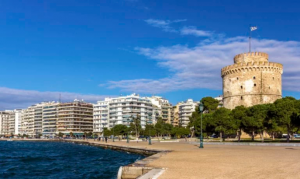 Built near the sea, at the back end of the Thermaïkos Gulf, Thessaloniki is a modern metropolis bearing the marks of its troublesome history and cosmopolitan character.

“Greece’s second city occupies a strategic tourist and travel position in the central north. Charming and easily accessible it is considered a gateway to Greece to arrivals by land from the Balkans, a strategic airport hub and is also a gateway to the Chalkidiki peninsula,” says Hellander.
Distance from Athens: 540 km.

Kastoria
Built amphitheatrically on a narrow peninsula and described as the ‘Lady of Macedonia’, Kastoria is a beautiful lakeside town similar in style to Ioannina, nestled in between Grammos and Vitsi mountains.

“Kastoria holds the key to the mid-north and border regions; nature, skiing, and through-connections to the borders of Greece make this little town a must to see,” says Hellander.
Distance from Athens: 495 km.

“Irrespective of where you choose to spend your precious time this summer, Greece will always be Greece; a unique and miraculous land.

“Nevertheless, it is worth encouraging fellow travelers to open their minds, look outside the square and embrace the mainland adventure that Greece has to offer.

“Dare to delve deeper and this little piece of heaven on earth will most certainly reward you,” concludes Hellander.