Greece was up 17 spots since last year

Greece is the most difficult country to set up a and run a business, according to the 2019 Global Business Complexity Index.
Out of 76 countries and regions examined, Greece occupied the top spot, up 17 positions in only a year.
Complexity in Greece is mainly due to frequent changes in legislation, differences in VAT depending on the region and unpredictable treatment of businesses by authorities.
Every week, new decisions and laws affect the way companies in Greece do business, manage their bookkeeping, plan for the future and communicate with clients.

Indonesia was second on the list, followed by Brazil, the United Arab Emirates, Bolivia, and Slovakia. The report also said: “Existing legislation in Greece can be complicated and new measures are continually being introduced. Sometimes, many laws are in conflict and it can be difficult for businesses to follow them and therefore know which to comply with. ”
The Global Business Complexity Index was compiled using research conducted among TMF Group’s specialists in 76 jurisdictions. 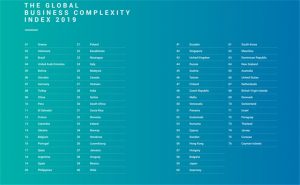 It measures ‘complexity’ in terms of how complicated and unpredictable a business environment is – and how difficult it is to understand and operate in. An in-depth survey explored three areas:
• Rules, regulations, and penalties
• Accounting and tax
• Hiring, firing and paying employees
The data for each jurisdiction are statistically weighted and combined to produce an overall complexity score and ranked index. Follow-up interviews conducted with specialists from the ten highest and ten lowest ranking jurisdictions, explore their business environments and investigating scores in greater detail. Experts are asked to score the complexity of several issues on a scale of 1 to 10, with 10 being the most complex. It calculates mean scores on the same scale.